My Partner Is a “Minute Man” and I’m Frustrated

My husband is 35 but I feel like my high school boyfriend lasted longer than he does.  My husband and I have sex about 1-2 times a week and at least half the time he’s done in less than 2 minutes.  The rest of the time it’s maybe 3.  I’m not kidding.  It makes me not want to have sex with him at all, because I never get to finish before he’s done.  He is always willing to go down on me before or after sex, but honestly, I don’t enjoy that as much as sex anyway.  Is there any hope for us? 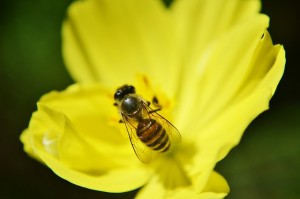 pollinating quickly and flying away leaves this a sad flower

Dear MMM (the sound you’re not making in bed, ironically),

Good question.  Obviously it’s going to be frustrating for you if you never get to orgasm through intercourse, which, by the way, is great for you, since 75% of women can’t orgasm from intercourse alone.  I empathize with your lack of interest in oral sex; in couples counseling it is fairly universal that guys think women want this much more than women seem to actually want it.  But here’s some interesting information for you: 43% of men finish intercourse within two minutes or less!  But, you came to me for help, not depressing (yet possibly relieving, in a misery-loves-company kind of way?) statistics.

1. Increase the times per week that you have sex.  Counterintuitive, since you aren’t enjoying it much now, but if your husband is too excited each time, that is exacerbating this problem.  And if you’re going to say that he masturbates the days you’re not having sex anyway, this is not my point.  Sex is way more exciting than masturbating, so you want him to get less excited by the idea of sex (which will get you more excited by the idea of it, indirectly!).  Also, he may be very nervous about sex because he always thinks that if he doesn’t please you, you won’t want sex at all.  (And he’s right, from what you say.) So, if he sees that you initiate sex more, he will also relax more. And this is good, because being anxious also makes sexual performance, including premature ejaculation (which this actually isn’t, since that’s defined as less than 1 minute, usually) worse.

2. Make sure that you tell him you love him, and act complimentary and affectionate.  Your husband probably feels like a huge loser for his performance issues, and feeling depressed, anxious, and sad is also going to make his performance worse.

3. Try the start-stop method.  This means that you manually stimulate your husband till he is on the verge of orgasm, then allow him to recoup, and continue again.  He tells you when he is ready to orgasm, and then you stop.  (Or you can sense it and stop.)  This allows your husband to practice getting to the edge of orgasm and then holding it back so that he doesn’t finish.  He can do this himself too (but not as helpful because you, the super-exciting stimulus, aren’t there), and you can eventually build up to doing it with sex.  This would look like: you have a few seconds of sex and he pulls out, over and over, allowing himself to rest for a few seconds and calm down, and start again. Eventually he can stop and rest while still inside you.  And even later, he may be able to have control during intercourse in general.  It’s both a a mind and a pelvic floor issue.

4. Try to get as excited as you can during foreplay, so that you’re on the verge of orgasm when intercourse begins.  Even if you don’t like oral sex, maybe you like manual stimulation, or caressing, or kissing.  If you’re almost ready to orgasm when you start intercourse, then hopefully you’ll be able to finish within the time he can last.

If you try all these tips and nothing improves, get thee to a sex therapist.  Your sex life deserves it.

Thanks for writing in, and good luck having some 3 minute sex.  Baby steps.  Till we meet again, I remain, The Blogapist Who Loves Sex Statistics.

Next article Stop Depending on Men »